Won this book of the Exquisite Reviews Giveaways…. From my email 😌😄💀 gifted by Karla Robles 🌺 “The Accidental Dragon by, Dakota Cassidy 📗 this the 9th book of the Accidentals Series 😒 definitely going to buy the rest of this series ..📚🔦💳 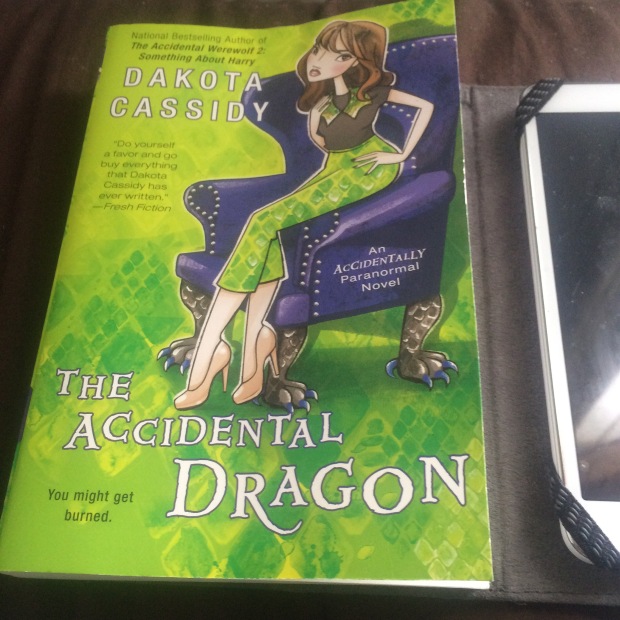 Synopsis: From national bestselling author Dakota Cassidy comes the latest in a series that “gets better and better with each book” (Bitten By Books). Firefighter McAllister “Mick” Malone knows he has a protective streak, especially when it comes to his deceased best friend’s sister, Tessa. But after twenty-five years of verbal sparring, Mick can’t help but notice that their recent arguments have started to feel a lot like foreplay. And while Tessa knows exactly what to say to get him going, Mick is thrown for a loop when he actually starts breathing fire.
Antique-store owner Tessa Preston has loved Mick Malone since she was ten years old—not that she’d ever admit it. Fighting with Mick is the only thing keeping her from an embarrassing romantic confession, but when the sexy firefighter accidentally ingests some ancient dragon scales masquerading as powdered aspirin, Tessa finds herself handling something much hotter than long-simmering sexual tension…

I might be a wee bit late for Cousin Missy’s wedding. It’s been a tough week. Turns out, my blind date from hell was literally from hell. Guy bit me. Next thing I know, I’m being chased all over the city by vampire hunters. And did I mention that I got fired, too?
Bright side-I met a man. Thierry de Bennicoeur. How great is that name? Anyway, he’s sexy, six-hundred years old, and a tad suicidal, but no one’s perfect, right? And we have a deal-he’s gonna show me the ropes of the vampire world, and I’m supposed to help him end his existence. Or maybe I’ll just try to convince him life is worth living – no small challenge with the mostly immortal, let me tell you. I’ll admit it’s a complicated relationship. But with any luck, I just might have a date for that wedding after all…
Hugs and Kisses,
Sarah

“All The Pretty Dead Girls, by John Manning”
Synopsis: At a private women’s college in upstate New York, a student was brutally attacked in her dorm room. Her assailant was never found. Sue Barlow arrives at Wilbourne College 20 years later. When a classmate disappears, Sue thinks it’s an isolated incident. But then two other girls vanish.
“Evil Without A Face by, Jordan Dane
Synopsis: Haunted and obsessed . . .
She sleeps with a Colt Python in her nightstand and her senses on alert—Jessica Beckett isn’t taking any chances. Hiding a chilling secret, living in a world of snitches and felons, good cops and bad dreams, Jessica is a bounty hunter who brings lowlifes to justice. But not even she can imagine what she’ll face when she tracks an online predator who has abducted a naïve teenage girl.
Making promises that can’t be kept
Former NFL quarterback Payton Archer swore to his sister that he’d find her only child. But the police have no leads, and the teen’s trail has turned cold. Plagued by personal demons, Payton’s never considered himself a hero, but this time he has to be.
And fighting a faceless enemy
Joining forces to save the seventeen-year-old girl, Payton and Jessica discover that she’s nothing but a pawn in an insidious, terrifying global conspiracy. They’re battling a new kind of criminal . . . and soon their race for answers will become a dangerous struggle for survival.

Synopsis: My name is Sarah Dearly, and I’ve got major problems. Last month, I was turned into a vampire by the world’s worst blind date. Then I may have, totally by accident, started a war between the mostly peaceful bloodsuckers and a bunch of sociopathic vamp hunters who have nicknamed me the Slayer of Slayers. Now I’m being used as bait to draw out the hunters’ bad-ass leader, while my gorgeous 600-year-old boyfriend Thierry seems to be blowing me off, and my sizzle-hot, fanged friend Quinn is trying to turn my self-defense lessons into make-out sessions. So you know what? I’m done. I’ve had it. There comes a time when a vamp has to just suck it up and go after what she wants. And as soon as I figure out what that is, that’s exactly what I’ll do…