Currently “Hear Me Out” by Lila Rose. 📖

Man, I been dying to read this book and finally gotten the chance to read it because I wanted to read Beast story. Plus it sucked that he lost his hearing I hope that he continues to talk more I also wish he could get a hearing aid that is so awesome. I thought he and Knife were cute together and glad that the brothers accepted them. I mean why shouldn’t they I mean they accepted Julian and Mattie not only them but Billy and Pick even though they have Josie. But to me, the guy that called Knife a sick fuck was hella rude. I was hoping there will be a story about Jeremiah and the girl Pooky or at least some girl he cared about plus I want the story of Handle and Della. I cannot wait. Btw, I also think there will be another guy couple after this. If so I will read that and the others to come. 🙃 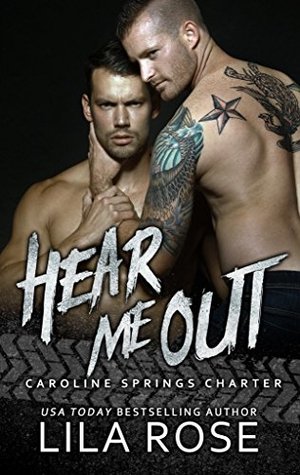 Fear keeps the truth away from his brothers. Fear and pain keeps him away from the man he loves.

Hawks MC member Maddox “Beast” Lawson had a difficult time growing up. Tired of being ridiculed because of his effed-up brain-to-mouth connection, it was easier to say nothing at all. Living in silence worked out just fine until that b*tch called Fate took his hearing, not only that, but she also threw him into the arms of the man who refuses to acknowledge that one hot night they shared.

Both lives are going to change. Only will it be for the better?

Preview
View all of your books with notes and highlights »