Handle put that Handle in Della and made a baby

Ohh I knew this book was going to be good. I didn’t even have to think about.

… Spoilers here and there..

I love Handle and Della story, I was glad they both found Love in each other. Especially with what they both been through.

Handle with the murder of his wife and losing her and thinking he’ll never find another like Jenny. His brother was the cause of his love to die. And having the hawks kick his *** because of his bum of a brother. I was glad that Pick came in a save him for dying too. Because Pick understood Handle and his situation because he was once there before.

And to Della situation with his sister getting killed by a evil man Melissa demon ex husband. Who I’m glad finally got his ***killed. Because he not only hurt Ashley sister but Della too. With drugging her and letting his men rape her.

And then her parents disowning her because she went after the man who killed her sister.

In the end I was glad they both made each other happy Finnegan (Finn) aka Handle and Mardella aka Della. I love the fact though she was learning to get her control back from what those men done to her she confined in Handle. And ended up with his child. So cute. Good story cannot wait to read the next book to the Caroline Springs Hawks MC series with Fang and Poopy. I was like who in the world is Fang lol then I realized who he was lol. But anyways I’m hoping for a story with Elvis too. 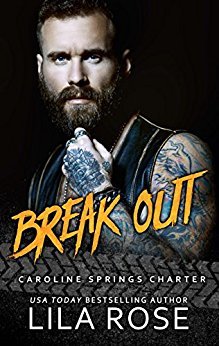 Pain. It was something Finn “Handle” Kaidion knew well after losing his wife. Pain was what kept him guarded against any further relationships.

Pain was also something Mardella “Della” Kent felt after losing her sister and from being dragged into the pits of hell by a madman. Only he was no longer an issue. Instead, having her parents turn their back on her was a new reason pain kept beating at her door.

Can two people learn to trust and live free from their past sorrows?