My current read 📗 @lilarose78 … I already knew this book was going to be good 🤷🏽‍♀️ ………. I’m hoping the author add another story with Alvin; Muff; and Gamer in there 🙏….. I know it’ll be good and interesting Because everyone I read was. And only one of her storylines pisses me off. That was with Saxon & Nary….. but with this story it was good. Y’all should read this series 👌🏽

>> So many thoughts, and opinions, along with a bunch of SPOILERS in the inside of this review<<<<<

I hope the author will write a story about Alvin, Poppy brother (I mean he still a Hawk right)? I want to know what happened to him to make him the way he is. He cannot do with Switch (Dang, dad). Not only, that, I hope she writes a story about Muff and even Gamer. I hope so. Towards the end, it has me curious with East (Easton), And LAN! Not only that maybe Parker and Alan have a thing; and maybe all 3 Lan, Parker, and East will end up together or just LAN and East. Cannot wait for that story either because I am curious now -@and want to know what up with Lan and East.

When it comes to this story, I’ve wanted to read Fang and Poppy story, after readings book five because of what happened with Fang. For one I already knew this book was going to be good. Like every book, I’ve read by this author (no ) every Mc hawk series I’ve read by her was good. The only one of her storylines pisses me off. Was that of Saxon & Nary….. but with this story it was good. Moreover, you weren’t disappointed at all from beginning to end it had my attention. Cannot wait for the next book. I know it’s going to be a good one.

I still think that Parker and LAN are dating or something because something isn’t right about that situation. Plus, what’s up with the men beating him up. Gosh, now I’m curious. Especially when Fang and Poppy son Nate mentioned he wasn’t going to be missing with a girl or boys like Uncle Beast and Knife but when he said Uncle Parker but was cut off by Charlie (Poppy father who’s his grandpa). I was done for because I wanted to know whom Parker was kissing lmao ugh I bet it was Lan ugh. I hope the author makes this book soon got to be this year. 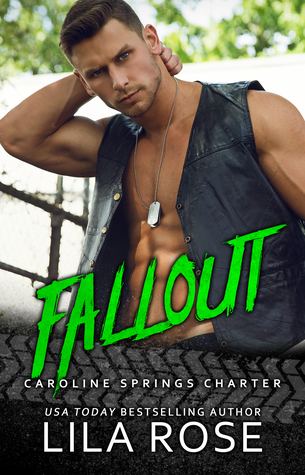 Poppy Torian has been in love with Jerimiah since she moved to Caroline Springs. Only he didn’t know she existed until her dad joined his father’s MC club, the Venom’s.

Friends. It’s what’s she been assigned to, but Poppy wants more. Biding her time, a few years to be exact, she goes to make her move. But when she overhears Jerimiah saying things that crack her heart, she runs.

In an emotional state, she makes a grave mistake and heads directly into the path of trouble. Poppy has no choice but to leave town; it’s the only way to protect the people she loves.

Jerimiah “Fang” Liang has dealt with a lot of crap in his life. A corrupt father, an MC he doesn’t want to be a part of—until he changes clubs and hooks up with the Hawks MC—and the loss of a woman he thought could be his forever. Until she left him for four years, without giving a reason why.

But sh*t really does happen for a reason. She’s back in town and is the one woman who currently doesn’t want anything do to with him. But Fang is determined to change her mind, to help her out and win her over… despite the possible fallout.