Currently reading 📖….. 74% done with “Out of his League by Maggie Dallen…

I didn’t like this book. I mean it was interesting enough to read. But it wasn’t my cup of tea. I like a book where I cannot stop reading I will want more of it, that have you at the edge of your seat (at a football or basketball game) it didn’t pull me in. Though I did wanted to read this book to see what was going to happen… I did like some parts in the book, but that was it! I am not sure I will read the others to this series. 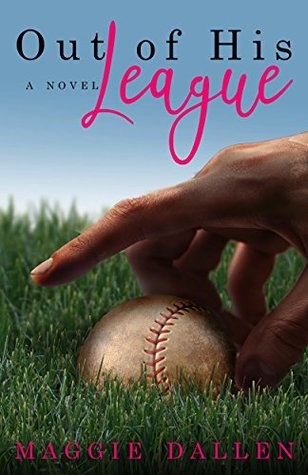 What’s the first rule of reinventing yourself as a cool girl at a new school? Steer clear of your old crush.

A new school means a fresh start. So long Ronnie Smith, invisible tomboy, and hello Veronica, popular new hottie. This is my chance to finally be seen….and kissed. Yeah, that’s right. I’ve never been kissed. But I mean to change all that now that I’m starting over with a new look and attitude. The only problem? I’m not the only one from my old school who’s transferred to Briarwood High. Drew Remi is here, too, and he’s still the same wildly popular baseball star. He’s also the only person who can ruin my new life. But he can only rat me out if he recognizes me…So, why am I so upset when he doesn’t have a clue who I really am?

Okay, part one was actually good, but I wanted to get to the part that I really wanted to read. When he came back from the dead (more so from the dungeon that Bears dead had him in) and had everybody thinking he was DEAD. However, on the real; I wonder who was that lady that he was talking to; it’s a possibility that it could’ve been Bears mother! Who actually knows! However, you could tell that Preppy was in LOVE with her and her in LOVE with him. However, I hope he doesn’t forget his friends or whatever! I’m a be tight if he isn’t his funny self! Plus he let Bear hit, but I still think Bear should let Preppy hit Ti… I mean it would be a good option since he knows what his lady looks like. However, I still want to know how in the world could they hear Preppy when he wasn’t even DEAD!

Part two is what I been waiting for part 1 could’ve been skip, to be honest, it wasn’t really needed when it could’ve been in part two. Like the two books before Preppy story! I wasn’t really a fan of part 1… Part 2 was better because Preppy was alive, and I was big mad that he was “dead,” but in actuality, he was actually alive. However, was in hand an of the cunt ball “Chop” also I still wanted to know who the woman he was talking to in the tunnel of hell he was in; at first I was like Maybe it was Dre, then I realize it had to be Bear mom!

Also, his friends expected him to be himself, but I understood why he was the way he was especially the hell he had been through with Chop! Bear and Preppy out of the THREE went through hell and back with torture from evil ass people.

The part was felt like a drag maybe because I was over part 2 by then lol! I was tired of reading the story wishing it was only two. However, I liked part 2 and 3 of Preppy story. Especially when they rid of both their enemies, plus they ended up with Bo and more. I wished the author make a story with the kids but knowing who their parents are it probably have murder and sex in it. Especially with Bo… I wonder if his real name is Bo like mmm…Kay? However, I liked Bo that ax trips me out every time, especially how he runs away and or end up in places he doesn’t suppose to be, and he’s only six years old. 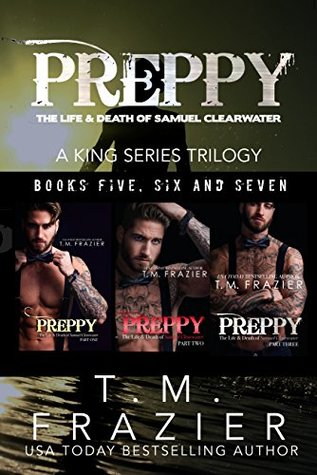 All three parts of Preppy, The Life & Death of Samuel Clearwater in one book.
Books 5,6 & 7 of The King Series.

Preppy: The Life & Death of Samuel Clearwater, Part One (King #5)

Samuel Clearwater, A.K.A Preppy, likes bowties, pancakes, suspenders, good friends, good times, good drugs, and a good f*ck.
He s worked his way out from beneath a hellish childhood and is living the life he s always imagined for himself. When he meets a girl, a junkie on the verge of ending it all, he s torn between his feelings for her and the crippling fear that she could be the one to end the life he loves.
Andrea Dre Capulet is strung out and tired.
Tired of living for her next fix. Tired of doing things that make her stomach turn. Tired of looking in the mirror at the reflection of the person she s become. Just when she decides to end it all, she meets a man who will change the course of both their lives forever.
And their deaths.
For most people, death is the end of their story.
For Preppy and Dre, death was only the beginning.

Preppy finds himself back in a world he once loved, but no longer recognizes. His dim smile can’t hide his inner turmoil and the people he views as family all suddenly feel like polite strangers.

Except for one person. A girl with dark eyes and even darker hair.
A girl who isn’t even an option.

At least, not anymore.

Dre can’t decide who she’s going to listen to. Her heart, her head, or her body. Because two out of those three things have her heading right back to Logan’s Beach. Closure is what she tells herself she’s seeking, but when she unlocks doors that were never meant to be opened she soon discovers that when it comes to Samuel Clearwater, closure might NEVER be an option.

This is book six in the King Series and the second part of Preppy and Dre’s story.

The bowtie is BACK!

Dre was just a beautiful stranger when Preppy saved her the first time around. Now, he has to save her again, but she’s no longer some stranger, she’s family, and he has no idea who or what he’s up against.

What he does know is that putting his family back together is the only acceptable outcome.

He’s alive…and he’s out for BLOOD.

Preppy Part Three is the third book and conclusion of Preppy and Dre’s story. It’s also the 7th book in the King Series, which should be read in order starting with KING & TYRANT.

Currently reading 📖 “soulless by @t.m.frazier 🙌🏾 …… though I’m on book 4 I’m still mad about Preppy 🙄😂 I might feel better once I read his story.

I don’t know why it felt like this book was way longer than it needed to be. It’s a possibility that I assume it could be because I had stopped reading it for a while. That’s why it took me to this point to finish it. Moreover, I will say; I wasn’t disappointed just wished that in the end, Bear met his grandpa, Joker. I knew there had to be a reason why Joker had showed up in Lawless. Both Abel dad and mom were pure evil like they were one in the same but evil in the same way but different too. Like how you want to kill your own kid; his parents weren’t his parents at all! Only King, Preppy and Grace was his family until Ray and Ti came along.!!!!! However, I’m just going to skip to what I want to say about the ending! Bruh I was that ending that guy they thought was Lance has to be Preppy, and he wasn’t even DEAD… if it is him I’m going to be legit happy; I swear to you! Because I been heated since King, Tyrant, and Lawless. I liked Preppy too… tuh!

Bear wants to bend the metal bars of his jail cell
with his bare hands and escape. Not because of the
men on the inside who want him dead, but because
Thia is out there where he can’t protect her.

Thia isn’t the type of girl to wait around to be rescued,
especially when she has some rescuing to do of her very own.

Bear and Thia are in for a fight, not only for their lives,
but for their love.

SOULLESS is book FOUR in the KING SERIES and the finale to LAWLESS.