😂😂 she said told the cops her name was ‘Regina George’😅

••••• beware of the spoilers before you continue to read and get mad that I said something in the story••• (:

But anyways I am going to say this; I believe it’s right to read King, Bear and Preppy story before you even want to read the story about Rage and Nolan! For one you’ll find In the Preppy story that Rage and Nolan were dating; two you’ll see that she and Smoke aren’t talking. So this is where this book comes in, and you’ll learn how both Nolan and Rage met and why they met through Smoke. Then towards the end, something happens between Smoke and Rage, and that’s the reason why he wasn’t around.
What got me was I assume that it was Joker who had to snatch up Nolan, and wants to kill him because of what Rage did to his house. But it all ball down to Rage old best friend Cody who was the one who snatches up Nolan. I didn’t know Cody had it in him or wanted to or capable of doing what he tried to do. You can tell he didn’t care none for Rage because if he did “as she had mentioned to him” he wouldn’t have hurt the people “the two people” that she cared out!

Not only that I was glad that they don’t hold anything against Smoke for what has happened between Him and Rage! In all it wasn’t his fault it was either that or be killed. But I was trying to figure out how in the world what I mean I was to figure out who got Nolan to lose to shoot Cody “finally” I guess the world may never know.

So anyways this was a good book; never been disappointed so far, I don’t think lol with this series. Can’t wait to read with a story with Smoke. This book is definitely a ⭐️ ⭐️⭐️⭐️⭐️ Star and worth reading. 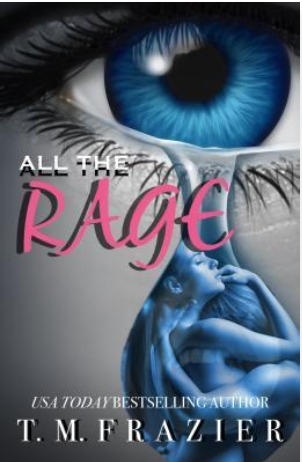 They call me Rage.
My real name is like a shadow, always close behind, but never quite able to catch up to me.
I fly under the radar because no one ever suspects I’m capable of the kind of brutal violence I commit each and every day.
You see, I’m a girl. I’m nineteen.
And I’m a killer.
I look like a goddamn cheerleader but can take out a man three times my size in more than as many ways, without hesitation.
This life is all I know. It’s all I want to know. It keeps the shit buried that I need kept buried. It allows me to live without thinking too much.
Without dwelling on the past.
Until him.
It all changes when an ordinary boy becomes my next target.
And my first love.
I have to choose.
The only life I’ve ever known has to die, or he does.
Either way, I’ll be the one pulling the trigger…