Reading 📖 “Up in Smoke #Book8”. so this book has 60 chapters. I’m like 60 chapters? Gotta be kidding me; I’m thinking, I’m not going to read this book that fasts to get to chapter 60. May take me a couple of days. But see I started reading this book yesterday and now I’m on chapter 35. Shocker? Not really, I can actually be done quickly when a book is GOOD enough to read. In my opinion, even though these books are “standalone” I feel like it’s best to read them in order. Like > Rage then Smoke” before those two the other books about King. Bear. & Preppy. After Preppy I decided on Rage. Since she pops up in Bear and Preppy story!

Smoke and Frankie… but what’s his real name!? bb

Up in Smoke was a good book, I enjoyed this book.
••••Spoilers? There’s a possibility of a one or two, maybe more.•••

So anyway, this book has 60 chapters that I thought I’ll never get to finish as fast as I did. But I finish; because the book was good enough not to read. I could’ve finish yesterday, but I had school work to do. So I put it on hold. Finish its day. I am glad that Frankie, made Smoke into a better man; and you could tell that they both began to fall for one other. But I do wonder did they kill Griff wack *** … he was one dirty dude, set there and taken Frankie, mom and Smoke, friends with benefit woman “Morgan” not only that but his baby too. Like who is that evil to do what he did to a woman. But I was glad that he didn’t murder Smokes, daughter. Smoke, definitely needed Preppy, Rage, Nine, King, and even Bear to have his back when getting Frankie back even though she was brave herself for going in head first when dealing with Griff wack self. 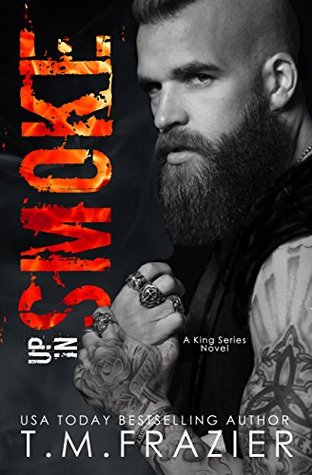 Up In Smoke is standalone.
You DO NOT have to read the rest of the books in the King series to enjoy Smoke’s story.

I’m a man without a conscience.
I deal in murder and mayhem.
I’m the best at what I do.
Frankie Helburn is supposed to be an easy job.
A means to flush her father out of hiding.
Simple.
Except there isn’t anything simple about Frankie or the secrets she’s keeping.
She’s stubborn as hell and the sexiest god damn thing I have ever seen, sending dark, dirty animalistic desire coursing through my veins.
She’s cocaine with legs. A f*cking addiction that makes me question things I’ve never questioned before. Want things I’ve never wanted before.
I might have her, but she isn’t mine to keep.
If her father doesn’t show his face, she will be mine.
To KILL.