Just finish this book 📖 the girl Abi got on my last nerve …..

How about a door down from Abi

***** Oh I pointed out a lot in this book, so be aware of the spoilers because its a lot.****
I was like if Denise comes for her, she better go for that neck. Just by reading this you could tell Denise never liked Abigail. Abi ass kept getting on my last nerve. I know that for sure. Throughout the book from chapter one to chapter thirty-two, she kept saying she was fat; I just kept rolling my eyes, because I am like lord girl shut up already, just exercise and lose the weight so you can be “skinny” … I hate when people who are heavy, medium size or whatever complain about their weight when they can exercise to lose it and eat healthier. Hell skinny people have it hard to especially if they are trying to gain weight. Both are the same people going to talk about your weight size and bullying you no matter if you are FAT or SKINNY… smh! One size is never better than the other; we all need to eat healthily.
But Abi ass also got on my nerves when it came to Jon; Evan liked her and taken her on dates etc., but Jon hasn’t done any of those things that Evan did. He even pushed her on Evan, by saying he liked her. Where all she thought about “Jon; Jon; Jon;” and I’m here like girl, please shut up about Jon. It got on nerves because I felt as though she needed him out her system like seriously; she brushes her off for Bean – pie head ass Denise and haven’t asked her out nor spend time with her even for his brother. I’m waiting on his wack self to diss Denise and actually be there and care about Abi like he is to him may as well say she loves him. Even his parents and her grandmother want them together. Took them fives years sixty-eight days to say they like each other; well him liking her! NOT!!!!!

“Your ‘friend’? You told me you only hang out with her because your mom said you too!” This exact quote irks me because he wasn’t her true friend if he lied to his “girlfriend” about who she is to him. I could smack him to the other side of Mexico. Knowing Abi, her tail still is obsessed and care about him even after the fact that he told Bean pie head I mean “Denise.”

I didn’t even felt bad for Jon when he came to Abi to apologize and quoted to Abi “I got so lost in having a relationship and not wanting to hurt her feelings that I forgot about my feelings—and I guess about yours too.” I would’ve been petty, saying Cee-Lo song “FUCK YOU” even though I’m crying and dying inside.. probably throwing darts at his picture lol. I was glad she brushes him off. Because he been doing that to her a lot especially around pinhead… glad they broke up; funny it took him long enough to realize his dumb mistakes… chapter thirty-two to realize smh!

It’s good to know Jon loves Abi wanted thirty-eight years (chapter 38) to tell her 😂😂 he could’ve been in chapter 20, or when he started dating Denise ass. 🙄🙄🙄
But forgiveness “It means forgiving others and yourself so you can live the kind of life you want.” is the key to a lot of things I already knew she was going to forgive Jon. I think he was just scared. Brained washed when started dating Denise though he says “I had to make you like me, I wanted to spend time with you, any chance I could. I told Denise that my mom was making me hang out with you because she was jealous, and it was the only thing I thought she would understand.” “Not that it was okay to lie, I just… got lost in it all.”

I just wished Jon would’ve told her from the start instead of running from LOVE blah! It’s good to know that Abi finally came to love herself and she stopped her running from things too especially with the situation with her parents. Her moving away from that toxic to end up moving with her G’ma be with those who loved her and cared about her and her well being. I’ll give this book a 4 star ⭐️⭐️⭐️⭐️ even though Abi on my nerves throughout the whole chapter except chapters thirty-seven thirty-eight maybe thirty-six too. 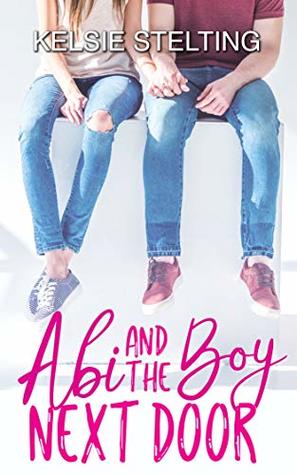 It’s the first day at my new school and I already have a wide load sticker on my back.

But this is still better than life was before. Before I was taken away from my parents. Before I moved in with my grandma.

Before I met Jon Scoller.

He’s cute, he lives down the street, but the guy asks way too many questions. Questions about a past I’d rather forget.

And I am not his type. He needs to be with a cheerleader. A perfect girl. Someone who doesn’t look like the before picture for a weight loss shake.

Jon makes me feel like I’m more than a number on the scale, but I’m starting to wonder: does he feel the same way or does he just feel sorry for me?

Fans of Sierra Burgess is a Loser, Dumplin’, and Sugar will love this heartfelt YA romance with diverse characters, a ride or die group of friends, and a teenage girl who’s still figuring it all out. Download Abi and the Boy Next Door today.