My next read besides the ebook I’m reading.

.=+++&*****Not that many spoilers but I am trying to make my point in this review with my thoughts lol.

I will say it’s funny how she tells Gus how it is, it’s hilarious. I agree with his friend Maxy, “I like her”… LOL, he (Gussy”) about the get in all the spots just to get himself some “Bo. I knew that Bo wouldn’t last long without falling for Gus, because as they say you cannot resist anything that you want. You will give in to temptation, and she also did, that part where she first ends up in the ER smh with the skate incident; which could’ve been avoided smh, lol. It was both their fault, but I liked how they both were they for each other when they both kept ending up in the ER.

Not only that I do think that Bo, but she’s also not trying to tell anyone the reason behind why she lost her scholarship to an Ivy league college. & not only that she gets weird when Gus kept asking about the kid in her phone, I still think the kid is her son, and she got pregnant, and that’s why she lost her scholarship. This my gut feeling; and I am always right.”

And ding ding ding, I was right, Bo is Davis mom. & Bo mother is a straight bitch. I’m hoping by the end that she can get her son back and be with Gus as a family. Her mom doesn’t deserve Davis, because the way she’s talking down on her daughter who’s Davis mom. What a bitch even, Bo dad Taylor knows Rachel being a cunt.

I was glad that Gus finally found out that Davis was Bo, son like took him long enough if it wasn’t for Gus mom telling him, I bet 100% that Bo would’ve taken that shit to her grave, smh. He hasn’t kept any secrets from her, and he told her, but she wanted to get stank mad and cry like girl shut up, he cared and wanted to know the story of what happened.

The fact of the matter is Gus has proven to her that he cares about her so Much. But in her mind, she’s not there yet. It’s hard for her to believe him because one he’s a hockey player two she dated one who ended up pregnant by. But she needs to realize that Gus isn’t Jesse.

She mad annoying because she felt like she can up and leave, but if Gus does the exact thing she’ll be mad as hell. I wanted to smack her in chapter thirty-one.

But in the end, I was that she realized that she can’t live without Gus and got her man back 2ho never stopped loving her. Not only that I also was glad that she and her mother Rachel finally made up. Though it sucked that she wouldn’t have Davis back as her son, it’s good that she still be there for him and with him even if only as his sister.

& before I end this book, I will say I just freaking hate Bo whole name especially that “Jane.” 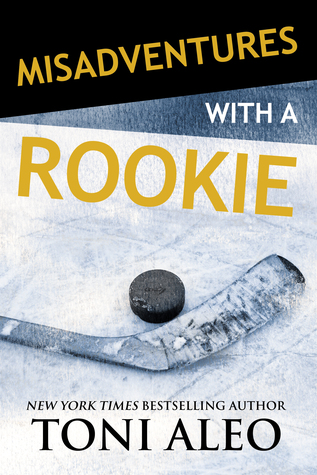 ***MISADVENTURES ARE STANDALONE ROMANCES THAT CAN BE READ IN ANY ORDER***

Winning has always come naturally for stud ice hockey defenseman Gus “the Bus” Persson. On the ice or off, he’s never had any trouble scoring, racking up goals—and girls. As the best player in his rookie class and the number-one draft pick of the Malibu Suns, he’s taking his game to the next level and is justifiably full of swagger.

So why does one of the Suns’ ice girls treat him like he’s invisible?

Bo St. James doesn’t have time for rookie hotshots who think their gloves don’t stink. She knows them, she works with them, she trains them. It doesn’t matter that Gus Persson is the hottest newbie she’s ever seen. She knows his type. She’s got big plans of her own, and she’s not going to let some cocky rich kid athlete keep her from her goals.

But there’s a chemistry between them they cannot deny. A lust that burns so hot, it threatens to melt the very ice on which they make their livings. The game has changed for both of them. Together, can these two play to win?