I’m over here wondering how she’s going to have sex with all five of her brother friends… like at the same time. Her coochie going to be open like a turkey on Thanksgiving… 😱🤣💨🤷🏽‍♀️💀

I liked this book it had my attention from beginning to end. But; one thing, I will say that it’s crazy how her brother didn’t know what was going on inside his house. All five men wanted his sister, and his sister wanted them. Neither of them paid any mind to what Henry wanted. It’s understandable why he got mad. And put everyone out; I did think that he called his sister a “fuxking slut” is so uncalled for … she may have done what she did with his friends. But the name calling was so uncalled for.
•••• But I’m still stuck on her having a relationship with five guys it is so weird. Like having to figure out who dicks you going to suck while trying to figure out what two guys are going to fuck you at once. Like sheesh, so intense. All of them was thirty. I believe she was twenty or twenty-one it was something close to that. They all fell in love with her. It’s interesting that they didn’t mind sharing. I thought sure that she was going to pick at least one guy, but she didn’t. I kept thinking it was going to be Aiden or Carter. Especially Aiden because he had done more to her than the other guys. Carter, Daniel, especially Aiden had sex with her more. I was like, but James never had sex with her though! Even, Ryan! Then towards the end when they got the house for them. It finally happened. I was like about time; because they never got that much play as Daniel, Aiden even Ryan got more play than James. I was wondering where he is going or doing lol! He is always leaving with Henry never gotten to have sex with Emily! But good book though; glad that Emily wanted to have kids with every one of them. I thought it was only fair… but if she wanted five kids, she could’ve tried to make “quintuplets.” But having twins and triplets would’ve also made five each! 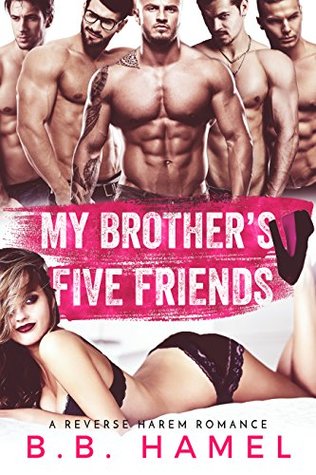 When I get evicted from my apartment, I move in with my older brother in his ocean-view mansion.

And he has other guests. Five sexy-as-hell, dirty, rich guests, to be exact.

Some of them remember when I was just a little girl, and some of them only care about the woman I’ve become. But all of them keep staring at me with that look, the one that makes my whole body tremble with desire.

My brother would freak if he found out that I want to taste all of his friends, and I can’t afford to be homeless. But my five men definitely aren’t stopping.

And I can’t say no when they sneak into my room in the middle of the night, half-dressed, their hands on my skin. There might be something here, something even deeper than the way their touch pushes me to my limits.

The craziest part is, they don’t mind if they’re sharing me.

And I don’t mind getting passed between them, from one ripped guy to the next.

My Brother’s Five Friends is an over-the-top reverse harem romance with lots of steamy scenes and some bad language. It’s only recommended for readers 18+.