I kind of forgot what actually happened in this series. I remember bits and pieces. But no way I’m going back to book 1. I’m a just continue with book 5, I’ve been trying to read this book for a while now. Never got around to it.

•••Spoilers, throughout this review.••••

I’ve been putting this book on the back burner for a while now even though I wanted to get into it. But never, felt like reading it. & I am glad that I’ve finally gotten to read this book to see what was going to happen next. Though; I have forgotten what the last four books talked about… but already knew that Tayah was going to get kidnapped she was just stupid as hell… thought she could protect herself knowing dang well that she couldn’t do that smh. I even though Sean was kidnapped too with her he was banging Kellie in his dad office. Like really boy; if it weren’t for you wanting some tail none of that would’ve happened to Tayah… though that security guard was an idiot smh!

Plus; Leroy, so worries about himself and his family that he doesn’t even know what is going on with Mackey. & Leroy wife Michelle knows something is going on with him too. I hope she finds out because Leroy could careless about anyone but himself. But he sure doesn’t care about his son LJ SMH! If it wasn’t for Michelle, I think that little boy wouldn’t be happy. I think the people in the red car have Tayna, but it couldn’t be Black Ice either; but who knows maybe it is Eli…. who tries to hide his identity by dressing as a woman. I hope they get Tayna back in time.
Not only that I hope that Eric doesn’t end up with HIV that would truly suck for him, but I do also think Rachel wants Eric more than she wants Sean. She can’t get mad that he kept her on the edge because how would he know if she wouldn’t go behind her back and fool around with his brother Eric again… a kiss is cheating regardless… I can’t wait to read part 6… I need to know… 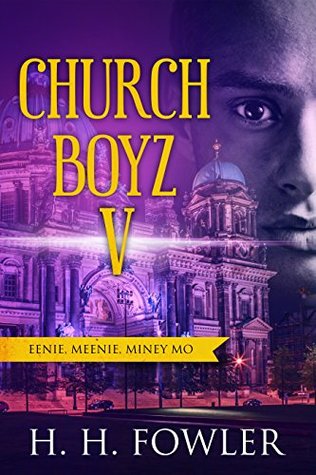 In book 5, the drama continues…

Bishop Leroy Paxton has not been the same since twenty-year-old, Ellisa Benjamin jumped in front of a flying bullet that was meant for him, leaving their six-year-old love child without the love of his mother. With Ellisa being supported fully on a ventilator, Leroy struggles with the decision to raise their son alongside his already established family. It’s even more disturbing when he discovers the child has formed an unusual attachment to his wife. He’s concerned the child will drive a wedge between him and his wife, so from that point on, he fights tooth and nail to keep Ellie on life support, praying for her miraculous return to mother their child. Unfortunately his actions are misconstrued as his continued attachment to his former mistress, which of course sparks an emotionally-charged conflict in the home.

Meanwhile, Leroy’s sons, Eric and Sean are involved in a love feud over Sean’s beautiful fiancée, Rachel White. The wedding is suddenly off between Sean and Rachel, which spirals into a contemptuous display of sibling rivalry and ego-bashing tactics. But with Eric’s HIV status still in limbo, it appears as if Sean will have the upper hand by default.

As if the elite clan doesn’t already have enough on their plates, a hitman, hired by Shaniece, is still hell bent on carrying out her instructions to eradicate the Paxtons from the face of the earth. The hitman motivates himself with a nursery rhyme, which in truth, is a death chant ingrained into his darkened heart, as he meticulously and methodically plans his revenge. One careless move by an unsuspecting member of the Paxton clan opens the door to a world of violence, suspense and intrigue. A world where there are no rules.

Eenie, meenie, miney, mo, catch a Paxton by the toe…if one hollers make ‘em pay…slay by slay I’ll kill my prey… Who will be the first on the hitman’s list?