One of my favorite authors… read mostly all of her books. 📚 I can’t wait to read this one… @kasiewest @epicreads

I’m never disappointed when I am reading Kasie West books. It never takes me long to read her books. I love this story; I knew someone was targeting Lacey; I never thought it was Aaron. I thought it was Faith the whole time; the author fool me…. but at least she got her career on top and got a connection with her main castmates; plus a relationship with Donovan. I can’t say too much about this book, but it was really good; I started on it yesterday and finished it today — definitely a 5-star book.

Fan favorite author Kasie West delivers an effervescent story about chasing your dreams and following your heart, perfect for fans of Jenny Han and Huntley Fitzpatrick.

Lacey Barnes has dreamed of being an actress for as long as she can remember. So when she gets the opportunity to star in a movie alongside one of Hollywood’s hottest actors, she doesn’t hesitate to accept the part.

But Lacey quickly learns that life in the spotlight isn’t as picture perfect as she imagined. She’s having trouble bonding with her costars, her father has hired the definition of a choir boy, Donavan Lake, to tutor her, and somewhere along the way she’s lost her acting mojo. And just when it seems like things couldn’t get any worse, it looks like someone on set is deliberately trying to sabotage her.

As Lacey’s world spins out of control, it feels like the only person she can count on—whether it’s helping her try to unravel the mystery of who is out to get her or snap her out of her acting funk—is Donavan. But what she doesn’t count on is this straight-laced boy becoming another distraction.

With her entire future riding on this movie, Lacey knows she can’t afford to get sidetracked by a crush. But for the first time in her life Lacey wonders if it’s true that the best stories really do happen when you go off script.

****There’s just a few spoilers***
I was going through book two and three and found out her parents done found out about them in book three by rumors come on now. I was going to see if I can make the pain go away by reading book two and three, but I don’t think I’ll make it because if book one feels like a freaking drag no way I’m a sit through another 60+ chapters I bet that book two and three have. Just for Reagan to be whiny every chapter I wish Stacey take pictures as she did with Cameron and Reagan just so my headache would be gone with this chick. Like gah; I hate books like this when the author drags the story on forever especially with so many unnecessary chapters ugh could’ve stopped at 20 something then made the rest into the next two books.
But the thing is this book is good omg! But I cannot take it. I just wanted Lane to stop giving in to her for once, like sheesh like hiding the crap from people…. but get mad when they spread rumors, I’m like if she doesn’t give them something to talk about. Like half the guys and her friends know that Lane liked her and their friend Tobi and both their mom sees it too. But nooooo stupid little sixteen years Reagan want to drag it, I’m like lordt Lane is eighteen he should’ve told Reagan I’ll wait for you once you turn eighteen because lord this girl whine throughout the rest of the book once Lane told her how he felt and when he kissed her. I wanted Lane to tell her father when he was talking about Paul wanting to take her out, but no she didn’t want to tell her father… I’m not going to waste my brain cells on the next books at all though I want to know what happens next if I do decide on reading them I pray it’s less than 40 chapters,….. I’m not going to lie the last few chapters I was scheming through them. Plus there’s the 4th book about their friend Cameron I more than likely will read that one, curious since he had a thing for whiny Reagan too. 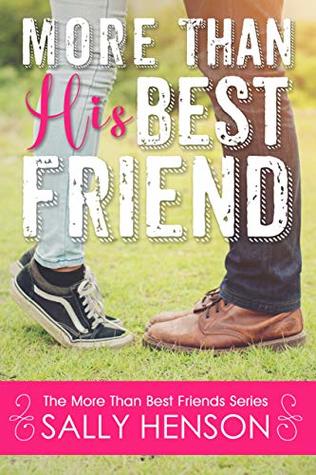 She’s got a strict rule against dating. Could her best friend be the one exception?

Regan can’t wait to leave her crummy small town in the dust. She spends her days taking dual-enrollment classes and her nights dreaming about her future out-of-state dorm room. She’s certain that romance would only ruin her plans and feed her small town’s ruthless rumor mill.

But when Regan’s best friend confesses he wants to be something more, she’s torn between following her dreams or following her heart.

With time running out before he leaves for college, Regan needs to make up her mind. Can Lane convince Regan to move past her rules or will he cross the line and destroy their friendship in the process?

More Than His Best Friend is a heartwarming YA contemporary romance. If you like sweet tales of first love, small Midwestern towns, and spunky dreamers, then you’ll love Sally Henson’s coming-of-age romance.

Buy More Than His Best Friend to fall head over heels for a sweet high school romance today!