So this book was good in the beginning then after a while, I got bored, and stop reading it… But in the end I wanted to finish it & see what happens next; & that I did…
For one I was glad that Finley finally wanted to go back into playing basketball again. & that her mom gotten better once the medication kicked in; & finally got to go home to her daughter. It’s a lot you go through as a foster kid, you have to take care yourself when time is rough; & often thinks no one LOVES or CARES about you at all because you never got that…. but I like how Finley finally realize that Chase and even Mrs. Beverly loved her (Finley) & opened her home to her (Finley) not only that but to her mother too, she could’ve said no even when it was Chase suggestion…

But I was glad that Mrs. Beverly didn’t have a problem with it (Finley & Chase being together); though I think that newsletter got out due to Veronica, I still think she had something to do with that picture “you never know”. Because she wanted Chase so bad & he didn’t even want her even before Finley came to live with him as his foster sister. I don’t understand how females come off as desperate when it comes to a guy & throw themselves at that guy who doesn’t even want them. I was wishing Veronica would’ve let the bitter hate she had for Finley go… plus I was also glad that Finley had her basketball friends & more so Lucy… but I realize who Lucy was 🤣 she the actual girl in the next book… which I am glad I didn’t even read before I read this book; that would’ve suck…. but I was glad she was there for Finley when she ran from Chase; but also glad that in the end Chase and Finley got to be together 🖤
Btw: I can’t wait to read Lucy story because I was saying that I want a story with Lucy not realizing she is the Lucy from the second book to this series🤣 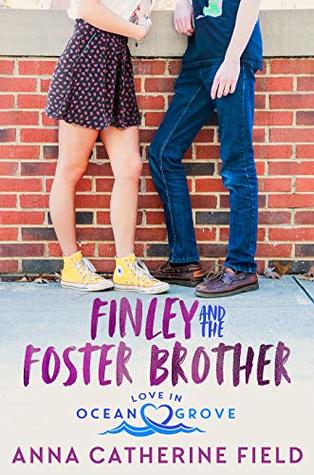 When a social worker and a truancy officer show up at Finley Rhodes’ cottage in Ocean Grove she knows her life is about to change forever.

She just didn’t realize how much.

At sixteen, she’d grown up fast, having the responsibility of taking care of her mentally ill mother, holding down a job to pay the bills and dropping out of school to do both. When her case manager tells her she’s being placed in foster care, Finley never expected her new home to be in the exclusive gated community and she certainly never thought she’d attend The Academy, a school for the privileged and elite. But the biggest surprise comes from down the hall.

Chase Powell grew up in the shadow of his famous model mother, living a life of fame and excess. After a dangerous accident, Chase is sent to live with his grandmother in Ocean Grove, where he settles into a life of normalcy and routine.

Until Finley moves in.

Late night talks, a game of truth, and revelations about their fears bring these two closer together, but it’s not like they can ever be more than friends and even if they could, does Finely worries that her whole life can be taken from her once again. What’s the point of falling in love?

Finley and the Foster Brother is a standalone novel from Love in Ocean Grove, a series of books about swoony, first-time love and toe-curling kisses for readers of all ages.