My current read.. tried to add it to my currently reading section on Goodreads. But Kindle is acting up smh 🤦🏽‍♀️ second time that app messed up!

I forgot who Allie was for like 2.5 seconds when I started this book. Because I had read the first book with her best friend (Indie & her brother Grayson). Then I was like ooooh okay that’s who Allie is… 🤔🤣

So anyway. I was glad this book didn’t drag their story. I was glad it was short and straightforward. That’s what I like; for one, I knew that Duane was going to fall for Allison. Soon as he started dating her, realizing she was different than Heather.

Heather got a fool too when she realizes that Duane wasn’t coming back to her. Since she was complaining about his clingy-ness and that was the reason for their break up. HA…

He wasn’t even thinking about her, only showing her that he was happy with the new girl (Allison) that he moved on with. Heather was so bitter too staring hard at Allison across the cafeteria and stuff. I felt like she tried to intimidate Allison in a lot of ways. & it affected Allie too, and she had insecurities that she had to work on. What made it worse was Duane’s sister stating that Heather was prettier than on top of that Allie seeing Heather kiss Duane in the parking lot. But I was glad that was all cleared out, and Allie forgave Duane.

Not only that, how I figure out that Duane didn’t care about Heather any more was when Allie mentioned Justin & when Justin was talking to Allie at the Ice Cream shop, which leads Duane to turn into Incredible Hulk and become jealous. Steam was coming out of his ears. He wanted to make sure JUSTIN knew that Allison was his girlfriend.. 😂 he wasn’t playing at all. I was here for it too since. They both confessed that they were in love with each other since their first kiss at age nine and ten. I was like FINALLY! But at least Grayson was happy for them both since he wasn’t into their FAKE relationship though I felt Allie was right when she said about Gray couldn’t get mad since he was dating her best friend…

I was glad Gray came around and understood. & he accepted their relationship since Duane confessed his feelings for Allie to her brother, his best friend (Gray). Which I thought was a good idea. Since Indie and Gray kept things from Allie when they were FAKE dating, but at least in this book, no one found out that Allie and Duane were fake dating.? 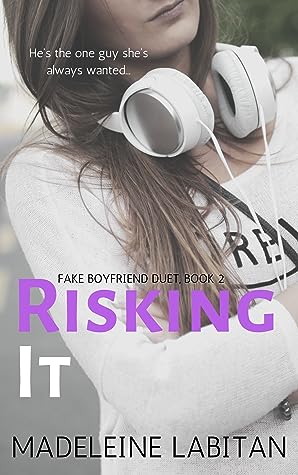 Allison Turner has always been known as a goody-two-shoes. One who always plays safe and avoids risks like the plague.

Well, it’s time for a change—and agreeing to be Duane Hollis’s fake girlfriend to make his ex jealous seems like a good start as any. There’s just one problem: he’s her brother’s best friend and the boy she’s secretly in love with. Complicated doesn’t even begin to describe the situation.

Allison knows it’s totally insane and completely stupid to help Duane out, especially when her heart is at stake. But maybe, just maybe, it’s exactly what she needs to turn things around…and finally get the guy.