Hmm 🤔? Will there be a lot of spoilers, maybe!

Soo. I liked that this one was just as good as the second book. I like a book that can keep my interest and have me curious as to what will happen next.

I could tell that Cade liked Tia, which she didn’t understand why would he pick her out of all the other girls and randomly single her out, which he explained to her his reason.

I understand her doubts about not giving in to him when he asks her to be his girlfriend. But I thought she was a fool to believe Chloe had to say to her about “why Cade asks her out,” smh! 🤦🏽‍♀️ She was just stupid to assume and believe what that horrible girl has to say. Because Chloe been a problem since book one. I mean Gah, she wants every guy that’s new or popular. They who don’t even want her. They go for girls who are the polar opposite of her and who’s way better.

Hence, Cade, he didn’t want to be alone with Chloe though I always thought he could’ve ignored her and told her no I am doing this with Tia ONLY! But I was glad that her best friend Lacey had her back through everything.

Not only that, she told her parents how she felt about the pageant and taking over her father’s technology business when all she wanted to be a career in art.

I’m glad Tia worked things out with Cade because she almost let Chloe out of everybody ruin her relationship. 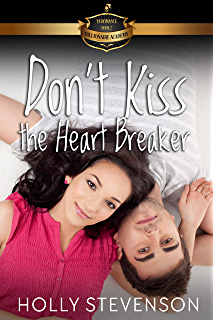 Cade Carlisle is the hottest guy in school—and he’s also the biggest heartbreaker.

So why did I just agree to go out with him?

Am I dreaming … or did the student body president and hottest guy in school just ask me out?

I’m seventy-five percent sure I’m dreaming. I mean … it had to be a dream, right? Cade Carlisle doesn’t just walk up to a nobody (aka, me) and ask them point blank if they want to go on a date.

Don’t get me wrong, it’s not like I’m a leper. When Mom’s got me all dolled up with my hair and face done to beauty pageant perfection—I’m more than halfway decent. Some might even say pretty—but thus far, I haven’t bothered with any of that at Mr. Rainier Academy.