I knew this book was going to be really good ••• I already want to know when book 2 coming out….. I hope it’s nothing like the gypsy brothers because I hated all of the brothers except Jace…. & I like Rome In this book; I’m hoping I don’t hate him…

•••Spoilers throughout this review; I just had to point out a couple of things!•••
So the whole time I am thinking that Rome had kidnapped Avery. Blah; when in reality he was kidnaped with her just for saving her. & both of them ended up getting hurt! I felt bad for both of them. But in my head; his friend Merc or whatever his name was told him to come towards the back area. But he was nowhere to be found. Like I am wondering did he had something to do with the kidnapping or did Avery cousin Ty had something to do with it. Like I want to know who are those ninja type dudes that kidnapped them and I want to know the reason by them beginning captured especially Rome; when he had nothing to do with them kidnapping Avery unless he does have something to do with it… but don’t know what. Not only that Elliot sounds familiar like he’s the guy from the gypsy brothers series or something I am not sure. I am so disappointed that this book ended that quickly now I want moreeeeeee ughhhhh it was so good! Like that ending had me so curious especially when the kidnapper came in and told Rome to kill Avery I wanted to know what he was going to do gah!!!

Not only that I think it was a good thing that she was taken away; but not to get torture, but do not marry Joshua, that would’ve been horrible. But something is up with her ex-boyfriend Will. It could’ve been possible it was him, but I am not sure it was him. But who knows, that kid was crazy, but she should know if that was him by his penis. I was so mad that she gotten raped and wish that Rome would’ve had sex with her because it wouldn’t be so bad if it were him instead of her kidnapper. But also, where the second guy that was in helping with the kidnapping its only that one man. I don’t want money; what do they want? Like ugh, my curiosity is torture right now. Btw: I kept thinking the book said “Veronica Blood”… 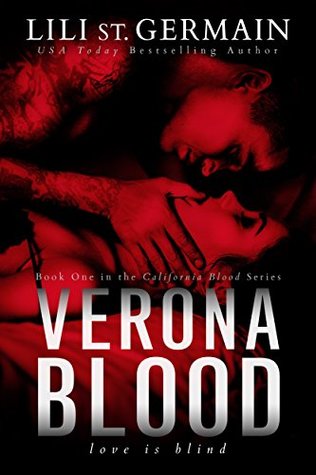 An arranged marriage. A brutal abduction.

And a love so forbidden, it might destroy them both.

Taken by a madman. Kept in the dark.

He’ll use her body. Destroy her mind. All before he ever lays a hand on her.

Rome Montague is a drug dealer. A criminal. A thief.

And he needs the secrets Avery and her family are keeping – even if it means cutting them out of her pretty Capulet flesh.

Rome Montague is missing – but nobody will miss him.

Not that it matters; After the things he’s done to this girl, he doesn’t deserve to be found.

Prepare to step into the dark and bloody underworld of California, as Lili St. Germain brings you a modern retelling of Romeo and Juliet, in the same vein as her bestselling Gypsy brothers series.

Verona Blood, set in the criminal underbelly of San Francisco, follows two warring families who are ruled by blood, power and twisted desire.