This book was good; I was rooting for Jamie, and Cole to come around!

The “other” Jamie; she let Jamie control her and everything that is going on in her life. From her clothes, the way she looks and the guy she likes. She’s so afraid of Jamie that she doesn’t have her own mind. I cannot wait until she grows one so that she can’t stop letting Jamie control her. The other Jamie needs Cole in her life. I cannot wait until Cole; probe to Jamie that he wants the “other” Jamie instead of her ass. I can’t stand that Jamie girl. The other Jamie; she doesn’t seem to bad; especially when she becomes her true self and not be who Jamie wants her to be. Hopefully, she becomes friends with Lacey and her friends once she showed her real self. But I am wondering if the “other” Jamie is the Jamie that was supposed to be friends with Lacey and her friends before their friend Ash had died, and the other Jamie became a cheerleader… I can’t seem to remember which Jamie it was.

Oh, I love this quote of what Ella said to the “other” Jamie “Are you sure? Because sometimes, no matter how much our friend likes a guy, if the guy doesn’t like her back, it won’t work out.” Lord, I hope and can’t wait until the other Jamie (Jamie Jenkins) understand that Cole not thinking about Jamie (the evil on one). This other Jamie is so dumb she let her friend talk bad about her talk about her weight etc., and she still friends with her. Even after the fact she (her friend Jamie) disrespected her brother girl Ella & still wants Cole after the fact she knows the “other” Jamie wants him / have a crush on him. Gosh, I want to smack the other Jamie so bad for being so ignorant and dumb minded ugh! This girl is so annoying! Gah!
But, the other Jamie seems happier since she got (well so, “devil” Jamie got rid of her)… like Ella said Jamie was toxic; she wasn’t good for the “other” Jamie. Once she was done with devil Jamie. Everything went well for her again! & in the end, I was glad that the “other” Jamie made great decisions; made new and better friends; apologies to many people she hurt. She seems happier since Jamie not in her life. Funny how “evil” Jamie wanted to hurt her (“other Jamie); but in the end, she was the one life gotten ruined by getting pregnant. Glad, that the guy that evil Jamie got pregnant by; his mom was smart enough not to let her get rid of the baby like she did the first one… Cole best friend Scotty dodge that bullet! & I am also glad that Cole finally stops acting stank and got with “other” Jamie finally it took him long (prom) enough ask her out. I like in the end (five years later; Cole and Jamie got married; Payton got married to Dragon, and Jake and Ella had a baby 😀

Goodreads Review: The Mean Girl and the New Guy (The Sunday Lunchers #3) by  Julia Keanini  *** https://www.goodreads.com/review/show/2663887176?book_show_action=false 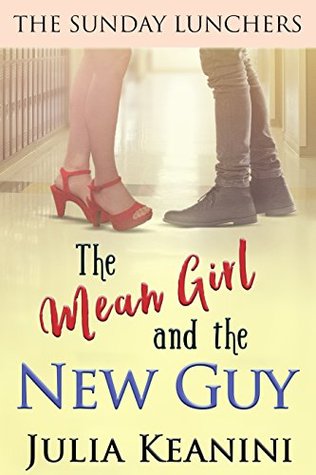 He’s the one every girl wants, but he only wants me. Too bad I can’t have him.

Life as the best friend of the most popular girl in school was everything I’d hoped it would be. Granted, people called me Other Jamie behind my back and I have to sometimes be a brat in order to keep my place as said best friend…but it’s worth it. Anything is better than going back to being only known as Jake’s, not as talented, little sister.

But then Cole.  I tried to ignore the way my heart speeds up every time he looks my way. The new boy is only trouble since my best friend has already laid claim to him. There are plenty of other guys and it’s something I make sure Cole understands.

But when I lose everything, it’s easy to see what’s important. But has Cole moved on?