A “brilliant, astonishing modern love story”* and an acclaimed literary debut… A young Cuban woman passes her nights dancing in a seedy Florida strip club; a Russian orphan loses everything, then builds a new and prosperous life for himself in New York; a woman struggles to maintain her dignity and hope after a life-changing accident—these are the three members of the troika whose story is told in this dazzling literary debut.

Their lives unexpectedly intertwined, Perla, Julian, and Sophie discover a world—a way of life—that forces them to challenge their definitions of commitment, love, and trust, a world that heals old wounds and inspires them to transform tragedy into beauty. “What a great gallop through the landscape of the human heart, what a brilliant, astonishing modern love story, what a beautiful pair of heroines, what an amazing journey from the plantains of Little Havana and a Fort Lauderdale strip club to Fifth Avenue and East Hampton, what a ride to a complex and satisfying redemption, what a glorious testimony to the way damage can become a lovely destiny, what a book!”—*Susan Cheever 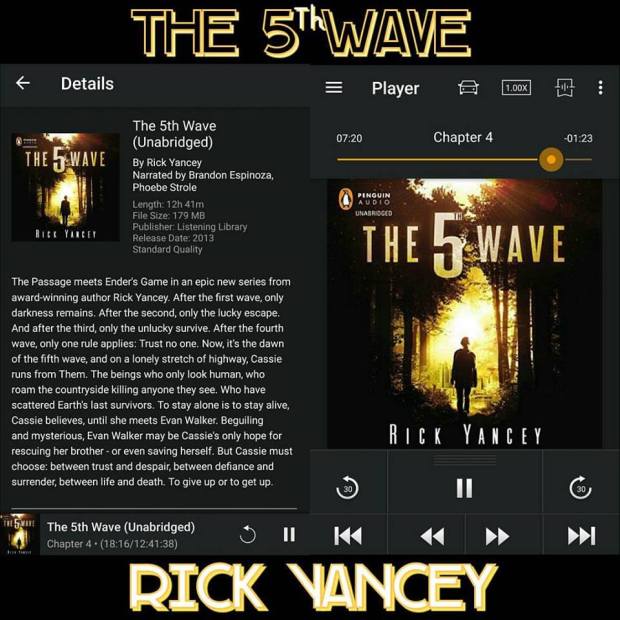 This book was so good like I couldn’t help but listen to it when I was supposed to be doing my assignments. The beginning had me lost because I assume the guy narrator was talking as Evan, but I learned that he was the narrator for Ben. I assume Ben may not be dead and figured out Evan was an Alien.

But I was itching for Ben and Cassie to meet up again, and it’s weird how he doesn’t remember her, it maybe because of all that he been through because in my mind I believe he was the guy who was hurt in the tent … wait yes, he was because he mentioned that he killed the guy who shared the tent thing with him.

Also, I was glad both he and Cassie made the promise to Sammie, that they’ll come back for him. I was weak though when they both were staring at each other ready to kill one another, but Sammie saved them both by running to Ben and removing the mask from his face.

And like Evan, he is a beast I knew it was him that was blasting all of those people that the evil guy Vosuh had mentioned. He’s the bimbo that killed her dad, right in front of her.

But I cannot wait to read part 2 and 3 I might have to find those books on Amazon the full set or go to Books A Million. And buy them because I am itching to know what happens next, plus I plan to buy the movie on google play so I can see it in video play 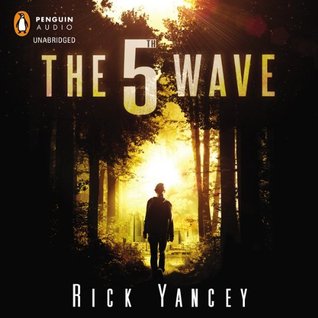 After the 1st wave, only darkness remains.
After the 2nd, only the lucky escape.
And after the 3rd, only the unlucky survive.
After the 4th wave, only one rule applies: trust no one.Now, it’s the dawn of the 5th wave, and on a lonely stretch of highway, Cassie runs from Them. The beings who only look human, who roam the countryside killing anyone they see. Who have scattered Earth’s last survivors. To stay alone is to stay alive, Cassie believes, until she meets Evan Walker. Beguiling and mysterious, Evan Walker may be Cassie’s only hope for rescuing her brother–or even saving herself. But Cassie must choose: between trust and despair, between defiance and surrender, between life and death. To give up or to get up.
Audible Audio, Unabridged, 13 pages
Published May 7th 2013 by Penguin Audio
Original Title: The 5th Wave
ISBN: 110161806X (ISBN13: 9781101618066)
Edition Language
English
Series: The 5th Wave #1
Characters” Evan Walker, Cassie Sullivan, Sammy Sullivan, Ben Parish, Colonel Alexander
setting” Ohio (United States)
Literary Awards: Georgia Peach Book Award Nominee for Honor book (2014), Keystone to Reading Book Award Nominee for High School (2015), Evergreen Teen Book Award (2016), Milwaukee County Teen Book Award Nominee (2014), The Inky Awards Nominee for Silver Inky (2013) …more
Other Editions (101)
All Editions | Add a New Edition | Combine
19 Jul 2017Leave a comment

Got this for FREE. wish the library had better maybe something like YA, Christian Fiction (Urban), or Fiction (Urban)… But I thought the description of this book was interesting.

ion of this book was interesting.

A woman survives a horrific attempt on her life, only to feel like a stranger in her own home, in the electrifying new novel from New York Times-bestselling author Karen Robards.

The house is all wrong. Her clothes are all wrong. When Katharine Lawrence recovers consciousness on the kitchen floor, staggers to her feet and looks at herself in the mirror, the beautiful face staring back at her is familiar-but wrong. Despite all the evidence-her pictures are all over the apartment, the clothes in the closets are the right size, and it’s her hair caught in the brush atop the dresser-everything feels wrong.

Maybe the trauma of the attempt on her life has given her some kind of amnesia. She’s twenty-nine, the special assistant to the head of the National Security Agency, and she’s lucky to be alive. She also knows she can trust no one.

Before she can act on her instincts and run for her life, CIA Agent Nick Huston arrives on the scene. The CIA is conducting a special investigation of Katharine’s boss, and the mystified woman in her “unreal” house is the key to the operation. But the real Katharine Lawrence has been whisked away for debriefing, and this expendable lookalike, Jenna Hill, is being used until the CIA gets the information it needs. But no one counted on Jenna Hill’s outrage at being used. And no one-least of all Nick-could have anticipated the heat that flares between them as the game plays on.

Finally got around to reading 📖 Soul Bound @marimancusi. Not sure what took me so long to even start on this book, I believe this is book 7, I have all 8 books!!!!

Sunny McDonald and her vampire boyfriend, Magnus, are on the run accused of treason and wanted alive…or undead. And her twin is the slayer sent to track them down. Rayne would do anything to save her twin sister, Sunny, from the Vampire Consortium dictator who wants her dead. Instead, she’s been commissioned by Slayer Inc. to find Sunny and Magnus and deliver them to the Consortium…which Rayne knows means certain death. She also knows that if she and her boyfriend, Jareth, disobey orders, they are signing not only their own death warrants but also those of every vampire in the Blood Coven. As a rival slayer with a personal vendetta moves in, Rayne and Jareth must do something to stop her. So they embark on their most dangerous journey yet, deep beneath the streets of New York City and through the Gates of the Underworld. But when a greedy god demands the ultimate sacrifice, will Rayne be forced to choose between her sister…and the vampire she loves? 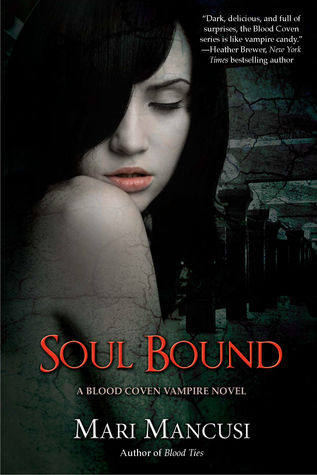 I started on Soul Bound back in 2013 or maybe 2014 (November or October) I can’t remember, but It took me awhile to finish this book and today midnight I almost finish it close to 1:00 am lol. I can say this book was good as the other six books once I took the time to get into the book and read it because the first time I read it, I kept getting distracted and couldn’t quite get into it. And man I can’t wait to read part eight (with Sunny and Rayne) point of view, I know it’s going to be good.

Plus with Sunny getting a do-over to get her soul back, I couldn’t blame Rayne, that’s her twin sister, who wouldn’t miss that opportunity to get their family soul back and have them on EARTH again. I also, like how the author Mari Mancusi added Hades (god of the underworld), his wife Persephone (Goddess of the underworld, the daughter of Zeus) and Hercules (Hero, and the son of Zeus). And how she wrote them in the book, by their looks the way they dress, and how Persephone and Hercules were dating behind Hade’s back lol like whhhhhat? Lol, plus when people die they went to the ‘Underworld” it’s kind of unique, like heaven and hell mixed in one, it was interesting. After seeing all of that, I wonder if “RACE” the rockstar going to change his ways as he says lol. But in the end, I hope they get Sunny from being dead and get Magnus from Pyrus claws; I am also glad that Jareth got to meet and see his family again since he blamed himself for his sister death. But I do wish his brother (wish he got to see his brother again and hopefully, prayerfully, I probably already know, both Sunny, and Rayne will be reunited with their vampire boyfriends Magnus and Jareth.

2⃣. Game on: A Varsity Novel by, Melanie Spring

3⃣. Stupid Cupid 💘 (the rules of love were made to be broken) by,  Rhonda Stapleton

4⃣. Data, A Love Story: How I Cracked The Online Dating Code To Meet My Match by, Amy Webb

6⃣. The Heart Broken In by James Meek

​Got these today. I never came across a illustrated movie companion before until today. I’m like why not get it? I’ve read the Vampire Diaries and seen the movie. 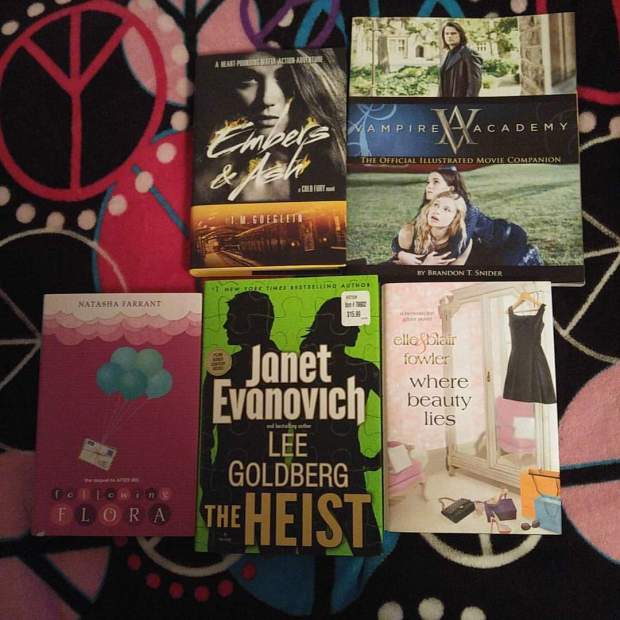 5. Where Beauty Lies by, Elle & Fowler 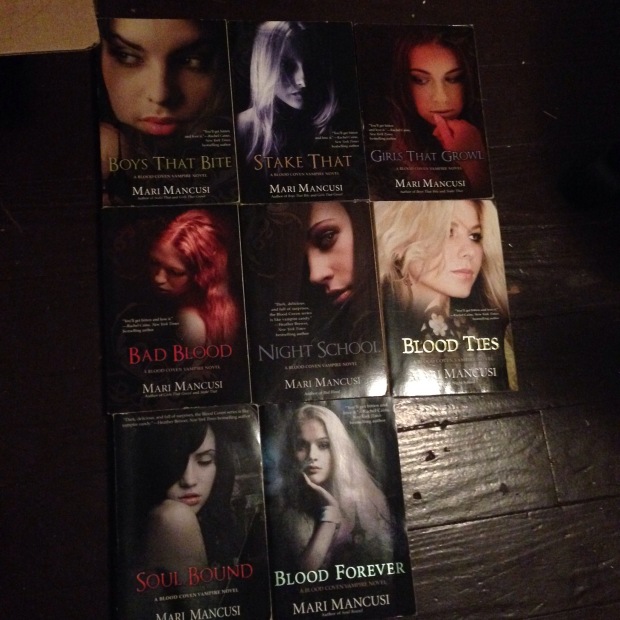 So, I went to food lion today and found this in the book section 🤓📖📘 I think I had wanted this book to I’m not even sure lol.
The Stranger by Harlan Coben 📘📖 @harlancoben

The Stranger appears out of nowhere, perhaps in a bar, or a parking lot, or at the grocery store. His identity is unknown. His motives are unclear. His information is undeniable. Then he whispers a few words in your ear and disappears, leaving you picking up the pieces of your shattered world.

Adam Price has a lot to lose: a comfortable marriage to a beautiful woman, two wonderful sons, and all the trappings of the American Dream: a big house, a good job, a seemingly perfect life.

Then he runs into the Stranger. When he learns a devastating secret about his wife, Corinne, he confronts her, and the mirage of perfection disappears as if it never existed at all. Soon Adam finds himself tangled in something far darker than even Corinne’s deception, and realizes that if he doesn’t make exactly the right moves, the conspiracy he’s stumbled into will not only ruin lives–it will end them.

Got all 4 which includes:

Without the evil Bishop ruling over Morganville, the vampires have made major concessions to the human population. But when a filmmaker goes missing after starting work on a documentary about vampires, Claire Danvers and her friends feel anything but safe…

Vampire Michael Glass’s music has attracted the attention of a music producer-giving Michael the opportunity to leave Morganville. But between a horde of hateful humans and a savage party of feral vampires, Michael may not make it to the show on time…or ever.