I am going to have actually rated this book a ⭐️⭐️⭐️⭐️ because I will say this being well I wasn’t really into this book, though the book was kind of interesting. Was it boring no, I just cannot figure out the word that I am looking for to describe this book.

So anyways I am sort of like Destiny father in this book. Some kind of in a way but not that overprotective though! However, I don’t play about the age range of dating no matter if it’s the son or the daughter. I felt and understood where Destiny was made about when it came to her father and Mrs. Swallow (lord I hate that name) who would want that last name. So anyways I understood why she was mad at them both well more so her father because he didn’t want her to date; because her mother left him for Pedro. He shouldn’t have done that and then meets Angelica and suspect for Destiny to date still not until she changed his mind because he wanted to date Angelica… I figure he was going to change his mind sooner or later. You and your child both would want to be happy. The mother is who will have regrets sooner rather than later. I was glad that Tyson didn’t care but did care enough actually to give him and Destiny a chance; even her father given him a chance because he wasn’t a bad kid… Just had many problems due to the fact of him having to take care of his sister and dealing with his alcoholic mother. 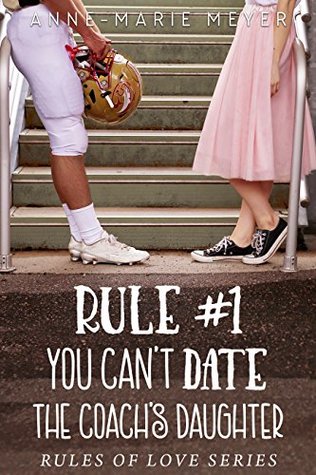 There are two types of people in high school: the ones that you can date and the ones you can’t. Unfortunately for me, I’m the latter. Even though I’m around hot football players every afternoon, they are not allowed to date me. If they even come close to flirting, my dad, Coach “The Boss” Davis, makes them run laps around the field until they puke.

Nothing scares off a boy more than the threat of physical pain.

Not only has he forbidden me to date anyone at all, he’s even made me the football team’s water girl so that he can keep tabs on me. Apparently, over protective dad is a fabulous guy deterrent. Outdoor shops should find a way to bottle it and sell it. They’d make a killing.

What Dad doesn’t know is that I spend every last second of those two blissful hours of practice in the scorching California heat, staring at Tyson Blake. He is the epitome of perfection in a six-foot-two, incredibly toned, smells-good-even-when-he-sweats, senior body. And when he smiles, angels sing. Literally.

And Dad hates him.

It feels a bit cliche to say I fell for the one guy that would send Dad’s already high blood pressure over the the top. But it’s true. There’s something about Tyson. Something he’s trying to hide. But I can see through his cocky persona and I know there’s something more.