Swipe left to read some real facts. 👌🏽 but anyways this my current read “keeping up appearances” my brain head to remove itself from the “sex, violence, and abuse” I’ve been reading 📖🤦🏽‍♀️😂😂

Okay, I will say this I liked this book once I started it, but then I started to get annoyed with the main girl character because she was a bit annoying and whiny in my opinion. This is where I give this book a 4 ⭐️⭐️⭐️⭐️ Star because of Holly.

•••• I’m going to add a few or maybe a lot of spoilers. So If you are planning to read this book don’t read this review because I spilled the beans mkay?•••••
So anyway, I figure that her ex-friend Nancy was behind a lot of things that had ruined Holly friendship with their friends. But when you are reading this book; you realize neither of the people she called her friends were her friends because they turned their back on her; whereas the “Bows” was there for her, and the “Gits” believe the lies and stories that Nancy was spreading around the school. The Bows didn’t believe a word that was said. I like how she actually became her true self when she removed herself from the Gits… I did look as though she didn’t have an opinion, but was very judgmental toward the Bows when she was friends with the Gits. Xander (I hate that name; like how you even pronounce it anyway) 😂 lol. But any-who; Xander (aka X – Zander) is how I say his name; oh back on the topic at hand; Xander he actually brought out the real her, and they both made each other happy. I didn’t blame both Daniel and Rachel be cautious of Holly because she could’ve hurt Xander especially since he did care and liked her… I still think that is why Xander and Jason have a beef with one another. They both wanted; and liked Holly and she was to blind to see because she assumes that Jason didn’t want her and will deny her, and she hated Xander because he was a man whore; she believes the rumors that were spread. In the end, she fell for Xander and learn that Jason did want and like her but Nancy the jealous cunt; lied to him about Holly liking him, and planning to embarrass Holly when she was going to tell Jason how she felt. But what happens was she got the guy and Nancy didn’t. Ha, karma is *****. Can’t be evil; hateful and cruel to people because something will not work out for you in the long run. And Nancy was still bitter at the end of the story when Holly gave her speech. 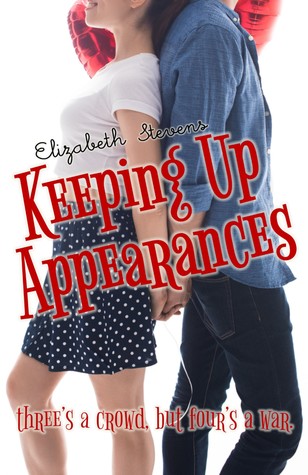 Three’s a crowd, but four’s a war.

What do you do when you find your best friend/crush kissing your other best friend on the day you were going to declare your feelings for him? You only agree to fake date your crush’s rival. The King of the Bows, popular golden (play)boy, and all around douche, Xander wouldn’t be my last choice for a boyfriend.

Across the school, battle lines are drawn and sides are taken between the new ’it’a couple of my former best friends and the excitingly scandalous pairing of me and King Douche.

Xander keeps distracting me from the plan; make Jason jealous. He insists on holding my hand and kissing me and being nice. Ugh. Xander’s not nice and he’s not the relationship type, but he’s doing a damned good job of acting both parts.

He calls it ‘keeping up appearances’, I call it ‘take one more pass at my arse and I’ll break your nose’.

They say all’s fair in love and war, but what’s so fair about falling for the wrong guy when your two best friends are on the other side of the battlelines?

Please be aware that this story is set in Australia and therefore uses Australian English spelling and syntax.